We use cookies on this website so that we can track visitor and customer usage of the website, e.g. to see what pages are the most popular or to improve ease of navigation. A cookie is a text file that is placed on your hard drive by a web page server. Cookies cannot be used to run programs or deliver viruses to your computer. Cookies are uniquely assigned to you and can only be read by a web server in the domain that issued the cookie to you.

You can disable cookies within the Internet Settings section on your computer. If you do not, we may use this data to deliver customised content and advertising from Hybrid to customers whose behaviour indicates that they may be interested in a particular subject area. If you choose to disable cookies, you may not be able to access parts of our site. We may use any of the following cookies: 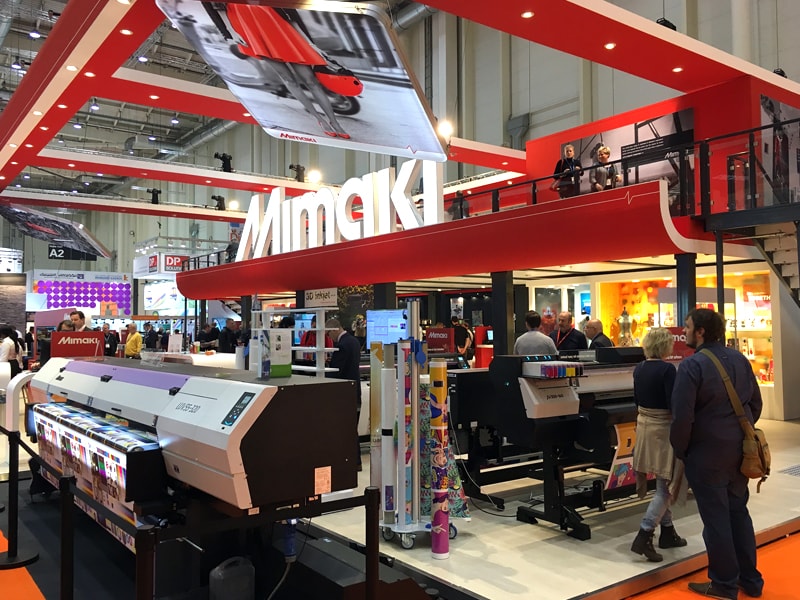 FESPA 2017 is a thrilling success for Mimaki Europe

Mimaki has reported that it had its biggest and most successful presence ever at FESPA 2017 with two stands totalling 534 square metres.

In addition to interest from visitors in Mimaki’s sign & display graphics, industrial print, 3D printing and digital textile printing solutions, visitors also took FESPA’s theme for the show to heart. The “Dare to print different” motto elicited numerous discussions about different and interesting applications that are not common in traditional business but for which Mimaki solutions are ideal, including printing on innovative and unusual substrates.

Mimaki Europe also received two prestigious awards during the show. The “Best Object Printer” was awarded to the new Mimaki UJF-MkII Series and “Best Textile Printer under 100 sq m/h” was bestowed upon the Mimaki Tx300P-1800 with its dual ink capability.

At the show, Mimaki Europe also introduced Yuji Ikeda as its new Managing Director. After spending seven years at Mimaki Europe, Ikeda returned to Japan to take on the role of Senior General Manager of Corporate Planning, where he served for several years before returning to lead Mimaki Europe.

“We were especially pleased with attendee interest in the technology demonstration of our 3D printer, the Mimaki 3DUJ-P,” says Ronald van den Broek, General Manager Sales at Mimaki Europe. “Based on Mimaki’s advanced UV inkjet technology, the 3DUJ-P offers high definition modelling with a maximum size of 500 x 500 x 300 mm. It is the world’s first truly full-colour modelling solution and supports up to 10 million different colours with the ability to achieve 84% of the FOGRA39L colour gamut with high definition printing.” The Mimaki 3DUJ-P, which also includes clear ink for stunning effects and a water-soluble support material that can be simply washed away, is expected to be commercially available later this year.

National Sales Manager for Mimaki’s UK and Irish distributor, Hybrid Services, John de la Roche states, “We were thrilled with the response to the new 3D printer and it demonstrates Mimaki’s innovative approach to new markets. The samples that visitors witnessed were beautifully produced and offer something quite different in the market.”

Van den Broek also reports that Mimaki’s new high-speed direct-to-textile Tiger-1800B printer took centre stage and was equally well received. It was the first time that Mimaki had showcased the printer with sublimation ink after demonstrating it with reactive ink at previous shows and to cap its success; textile company Estampados Hermanos Perez, located in Mataró, Spain invested in a Tiger-1800B having committed to the new machine during the exhibition.

In the Textile Hall, Mimaki also had on display the award-winning Tx300P-1800 and Tx300P-1800B direct-to-textile printers, updated to simultaneously load both textile pigment and sublimation dye inks. This enables the use of a single printer to print directly on a wide range of textiles without the need to change ink systems. This new technology is a breakthrough that improves productivity and increases flexibility and Mimaki showed digitally printed textile examples, ranging from apparel and accessories to home décor.

Hybrid Services Director, Peter Mitchell, states, “There’s a real interest in the new dual ink technology in the UK and Ireland. Furnishings and fashion designers and manufacturers can sample or bring products to market quickly, cost effectively and on a range of fabrics with just the one printer.”

Mimaki also reports that many visitors to the stand were seeking solutions that would enable them to print on natural fibres with solutions like the Tx300P-1800 with textile pigment ink. In addition, visitors were interested in using sublimation printing for fast fashion and soft signage.

Witnessing the change in how textile companies are operating by bringing production closer to their local market and enabling fast fashion workflows to deliver goods quickly, at high quality and with greater flexibility than ever before, Mitchell remarks, “The increase in UK and Irish companies investing in Mimaki’s volume textile production solutions at the exhibition was extremely encouraging.”

“The impressive textile-specific stand at FESPA demonstrated Mimaki’s significant commitment to the sector,” he continues. “With product launches such as the entry-level TS30-1300 dye sublimation printer right through to Mimaki showing the new 3.2m TS500P-3200DS with its inbuilt fixation, we’ve demonstrated a clear indication of how the company has a textile printing solution at every price point.”

In addition to learning about the Mimaki printers on display, visitors to the Mimaki stand discovered the wide range of applications that Mimaki printers can produce, with examples including printed notebooks, dresses, pillows, shoes … Mimaki aimed to inspire FESPA visitors by showcasing all these possibilities – daring them to “print different.”

Van den Broek concludes, “We are very pleased about the results we achieved at FESPA 2017. It was our most successful edition to date, and the show continues to exceed our expectations every year. It is the perfect opportunity to get in touch with visitors from all over the world and to discuss what Mimaki can do to take their businesses to the next level.”